I thought I was going to a meeting of state-wide bike advocacy groups. I tagged along with Jeff Miller, Prez of the Alliance for Biking & Walking, thinking we were on the same page. In fact we ended up at a bar in Union Station in Washington, DC. We arrived at some sort of critical point as people were jumping up on chairs and speaking in a very inspirational mode. I really didn’t get what was going on. (And it was still early in the evening.) Turns out it was a fund raiser for the California Bicycle Coalition, which is in the process of rebooting itself with fresh leadership and focus.

Steve Boyd of Dahon promised to match all $5000 pledges. Two people stood up. They downgraded the pledge amounts to about $1000. That’s the top picture. This was exciting, my hands twitched, but it was still too rich for my pocketbook. Note Gary Fisher in the front row.

They eventually downgraded the pledge amounts until it came within my range. That’s the bottom picture. Note Gary’s duds. These pictures were taken about 3 minutes apart. How’d Gary change clothes so fast?

CHALLENGE 1: A Planet Bike Blaze 2-watt to the first person who emails me the correct answer.

CHALLENGE 2: Another Blaze 2-watt to the person who emails me the best outrageous/weird/fanciful answer. 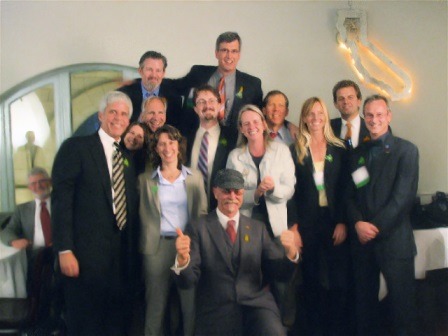