Back in December 2008, the LA County Bicycle Coalition launched a program called City of Lights. The goal of the initiative was to provide to immigrant population in Los Angeles with Planet Bike lights and basic information on safe and legal biking.

Planet Bike donated the first 100 lights to help the program get on its feet and to see how well it worked. Many lessons were learned, and a second round in March 2009 was conducted in partnership with CARECEN, a Central American immigrants’ advocacy group.

LACBC visited day labor centers, many of whose clients bike to and from work. This provided a more hospitable venue than a busy road and therefore allowed more time to discuss bike issues and install lights. The program has been well received by the immigrant community and LACBC is in the process of expanding it to include offering a bilingual version of the League of American Bicyclists’ Traffic Skills 101 class.

Many thanks to Dorothy Le, Allison Mannos, Adonia Lugo and the many LACBC volunteers that have helped make this program a success and are leading it into the future.

It is very important for the bike advocacy movement to reach out beyond its typical white, middle class demographic. To continue to grow and mainstream cycling we must reach out to all the other groups of people that exist in these diverse United States.

Below are some pictures of recent events. For video, click here. 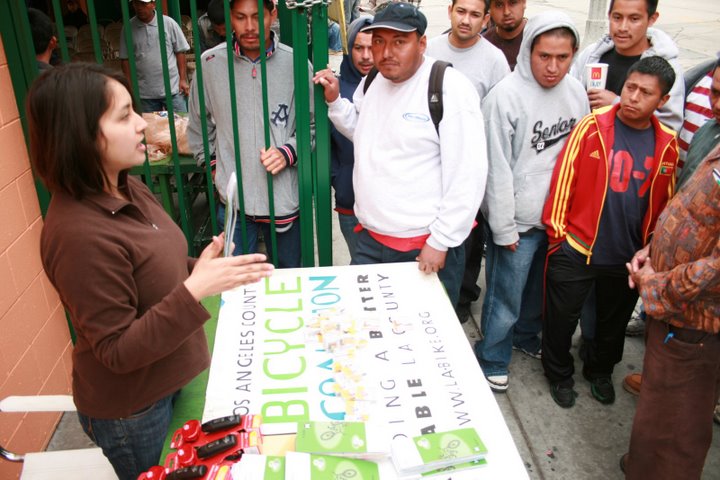