I’ve always been attracted to the intensity of large cities. I recently returned from New York City earlier this week. New York projects an explosive motion of color and noise and amidst all of the screeches, horns, sirens, and mobs of people all modes of transportation flow in unison, amazingly. Whale size buses rumble down the streets, yellow cabs sprint from light to light like cheetahs and cyclists make dashing ninja like moves as if it were choreographed. It was great to see NYC using green colored bike lanes and bike boxes or “safety blocks” as they are known to some which drastically reduce crashes and near misses between bicycles and automobiles. European cities have been using color for bike lanes for a decade again setting an urban cycling safety trend as San Francisco and Portland have also experimented with colored bike lanes over the past few years. 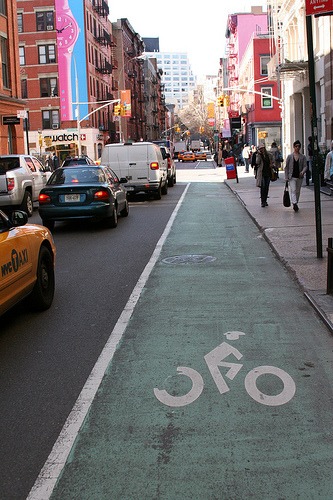