It’s been close to a week since we closed out the 5th annual Bacon on the Bike Path as part of Wisconsin’s Bike to Work Week. As I sit at my desk on this rainy day, I can’t help but wonder how we can make it bigger and better next year. For now though, let me reflect on this year’s edition.

The planning started weeks in advance. As the event neared, the checklists are narrowed down. Signs for the bike path are touched up, grills are tested, and the Planet Bike garage begins to swell with cargo bikes and trailers.

We all load our bikes and trailers with the gear the night prior and head on home. The plan to meet up at Heath’s at 5:35 AM. I felt like a young child on Christmas Eve, but instead of visions of gumdrops dancing in my head, I dreamed of freshly grilled Nueske’s bacon, delicious kosher donuts, fresh fruit, and Just Coffee brewed up for me!

As my alarm set off at 5 am, I hopped out of bed to feed our pets and off I went to meet up with the crew. I found Heath putting the finishing touches on his fully loaded bike with Billy joining shortly after. It seems this year Billy drew the short stick and ended up carrying the pop-up tent and a table, among other things. He was a sight to see with his Big Dummy and flat bed trailer heaping with equipment. The 5 mile haul was slow but steady and we were on sight around 6 AM. The rest of the Planet Bikers began to file in. Tents and tables were quickly erected, grills dialed in, and the bacon was sizzlin’ by 6:30. Jay hauled in the fruit while Dave stopped in at a local bakery to pick up the thirteen dozen donuts we ordered.

Our first commuters stopped by around 6:45. And on it went with steady traffic until 10. Some large throngs of commuters caused a few bacon shortages, but they were few and far between. By 10:45 our camp was packed up on the bikes as we set sail for PB HQ. We all patted ourselves on the back for a job well done. We had once again completed a hugely successful Bacon on the Bike Path.

We can’t thank the commuters of Madison enough for stopping by. And the companies that helped support the event and make it possible deserve a round of applause:

Only three hundred something days until the next one! 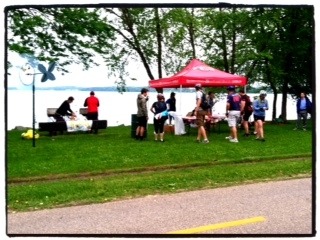